An extraterrestrial probe is detected approaching Earth. Unknown to humanity, an alien force has arrived in the far reaches of the icy Kuiper Belt and has begun mining a dwarf planet to prepare for an invasion.
With Earth’s nations unable to unite to address the alien arrival, transnational groups of like-minded political, military, and scientific leaders develop covert channels to coordinate a response. With the aliens’ motives uncertain, factions emerge, driven by hope, fear, or greed.
You will control one of these factions.
* The Resistance works to form an alliance of nations to mount a coordinated defense
* Humanity First vows to exterminate the aliens alongside any who sympathize with them
* The Servants worship the aliens and believe they will solve all the troubles of the world
* The Protectorate advocates negotiated surrender as the only means to avoid annihilation
* The Academy hopes the alien arrival heralds the opportunity to form an interstellar alliance
* The Initiative seeks to profit from the chaos and destruction
* Project Exodus plans to build a massive starship and flee the Solar System

A distant anomaly, a mysterious crash site, and a spike in reported disappearances. Could this truly be humanity’s first contact with extraterrestrial lifeforms? As your field agents investigate sightings and your scientists race to explore new fields of research, you will slowly learn the truth behind the alien arrival.
* From early sightings and UFO crash sites to rampaging alien megafauna and robotic armies, it will rapidly become clear that the other six human factions are not your sole competition. Throughout the game, illustrated events will present you with difficult choices as you investigate growing alien activity on Earth. Uncover the mystery of the aliens’ origins and motives – unless, of course, you are Humanity First, and all that matters to you is extermination.
* Terra Invicta has a global research system that creates opportunities for both competition and cooperation. Shared scientific advancement unlocks private engineering projects. Factions can choose to focus on private projects, at the cost of weakening Earth as a whole and ceding influence over global research direction to other factions with different priorities. Left unchecked, factions like the Servants or the Initiative may steer the world’s efforts toward developing methods of social control, rather than propulsion or weapon systems.

You begin on Earth as the head of a shadowy organization devoted to your chosen ideology. The aliens are coming – soon – but your first enemies (and perhaps allies) will be other human factions.
* Lead a faction united by ideology, rather than a nation defined by territory. This is a stark change from most strategy games – in Terra Invicta, you will not paint the map with the colors of some chosen nation. Instead you will rule from the shadows and compete with other factions for control points representing a region’s military, economic, and political leadership.
* Geopolitics is your sandbox – unite or break apart nations as best serves your ends, while using those under your influence to conduct proxy wars against the other six factions. Earth’s regions are modeled in detail, from educational levels and unrest to GDP and inequality. Gaining command over regions with great monetary wealth and military power can allow you to implement your will on Earth, but the war for the Solar System will not be won without also securing regions containing space launch facilities.
* Enact your will through a council of politicians, scientists, and operatives sent around the world (and even into space). The starting abilities of these councilors will improve through gaining experience and acquiring control over powerful organizations like intelligence agencies or wealthy corporations. A veteran commander may make the perfect choice to lead a tactical team under the council’s direction, while an experienced diplomat works to secure the funding needed to resist the alien invasion.
* Seek out like-minded populations and politicians and take actions to convert followers of opposing ideologies. Public opinion is modeled along multiple axes – the Servants’ alien worship and the Protectorate’s advocacy of negotiated surrender may largely align in terms of support or opposition to the aliens, but events that show the aliens can be defeated have the potential to convince followers of the Protectorate that resistance is a realistic choice.

Terra Invicta bridges the gap between our modern-day world and the vast interstellar empires of other space strategy games, asking you to take humanity’s first steps in colonizing our Solar System, where over 300 asteroids, moons, and planets in constant motion create an ever-changing strategic map.
* Take your faction beyond the confines of Earth, building space stations to act as shipyards and fuel depots, constructing mining stations to acquire advanced resources, and establishing bases to serve as research or construction facilities. Terra Invicta zooms into the strategic geography of the Solar System, presenting space not as a series of isolated stars that you order units to move to and from, but rather a rich and varied landscape of asteroids, moons, dwarf planets, gas giants, and other celestial bodies creating texture and tactical opportunities at every turn.
* The expansive map is constantly shifting as celestial bodies orbit the Sun. This means your space stations and forward operating bases are constantly moving as well, forcing you to plan accordingly and adapt to the evolving circumstances – your colonies among the Jovian moons could find that a once-distant alien military outpost or Initiative privateering base has suddenly become a close neighbor.

Terra Invicta explores what might be – how colonies on Mars might function, what plausible engines could power our spaceships, and the nature of how space colonization and warfare might proceed. Players may find themselves establishing a mining base on the asteroid 16 Psyche after noticing it is rich in metals – and then learn that in our world NASA is planning The Psyche Mission for the same reason.
* Exploring and eventually colonizing space will require access to many resources: water for life support and propellant, metals for manufacturing, fissiles for nuclear drives and weapons, and more. At the start, you’ll have no choice but to acquire such resources on Earth and suffer the high cost of using rockets to escape Earth’s gravity, but over time you’ll increasingly choose to instead rely on asteroid mining and other means of securing local supply.
* Spaceship design in Terra Invicta draws from the best of scientific speculation and hard science fiction. You can design your own ships, selecting from an array of weapons, drives, and other modules to place on a variety of hulls, ensuring each ship has the right mix of fuel capacity, maneuverability, and other capabilities.
* Tactical combat is built around a realistic simulation of Newtonian physics, where momentum and maneuver in 3D space are just as important as the firepower your ships carry. Fire missiles and use point defense cannons to destroy incoming projectiles; build up momentum then swing hard to bring the enemy into your firing arcs; or grapple with the difficult decision to retract radiators and sacrifice heat dissipation to achieve better armor against an incoming enemy barrage.

Terra Invicta is built with modding support in mind, and much of the game is accessible to modders without a coding background. We hope that the Solar System setting and geopolitics simulation will provide a useful framework for modders to realize their own creative visions. 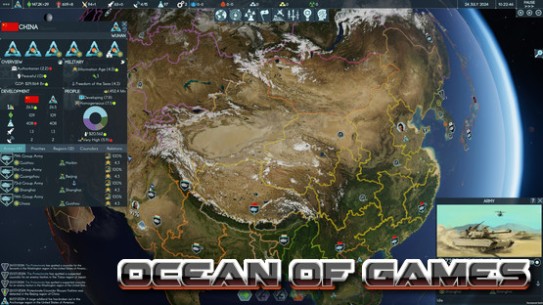 By clicking on the button below you can start download terra invicta v0.3.20 early access full and complete game setup. You should also install some extracting tool like Winrar in your computer because highly compressed game setup is provided in a single download link game and it may contains Zip, RAR or ISO file. Game file password is ofg